[The following story was posted on April 30, when we all knew Buck's time was running out. We just didn't know when it would happen and wanted to give him as much happy time as possible. Well, the hourglass emptied on June 27, when Buck had to be taken to the vet because he could hardly breathe. He had developed a heart valve collapse and couldn't breathe fast enough while his heart was unable to pump oxygen to the brain. Too old for major surgery, it was clearly time to say good bye. He was happy to the very last moment and seemed grateful to "fall asleep" while we held onto him and spoke softly. RIP, Buck.]

Our cat, TG, short for Tripod Girl because she has three legs, is devoted to our old dog, Buck. He is about 11 now, but could easily be a year or two older than that. He was rescued from a wilderness area in 2009 in pretty bad shape. With no information on his situation, we'll never know his true age or how he ended up out there.

However, veterinary examination revealed that he was a senior, no doubt about that with badly worn teeth and a graying muzzle, and had been abused for an extended period, as seen by the horrific injuries I'm not going to mention. He also was much too thin, had tick fever, covered with hundreds of them when found, and had a variety of less severe maladies, including ear problems.

Most dogs rescued in such poor condition are immediately euthanized. But for some reason, Buck was spared. Perhaps it was his winning smile, which is what drew me to him when I saw a photo on the Internet. I contacted the rescue who had him and inquired about his status. He was scheduled to be put down that day. But I had fallen in love with him already and asked if I could give him a chance.

Happily, they agreed and thus began his road to recovery. He was kept in veterinary care for a couple of months for treatment and recovery and when strong enough, was neutered and vaccinated. Even so, by the time we all were able to work out a transport to get him to me, he weighed 42 pounds and had a few more weeks of antibiotics to finish.

Despite his years of suffering, or because of it, he was very happy to be taken into a loving home. He's been here more than four years now and is close to his normal weight - 75 pounds. He's very furry and looks bigger than he really is, so some people think he's overweight. Our vet says no.

Meanwhile, TG has taken him under her wings, er, paws, and caters to him all day and sleeps with him all night. She grooms him for hours at a time, and then cuddles against him or relaxes nearby to keep an eye on him. 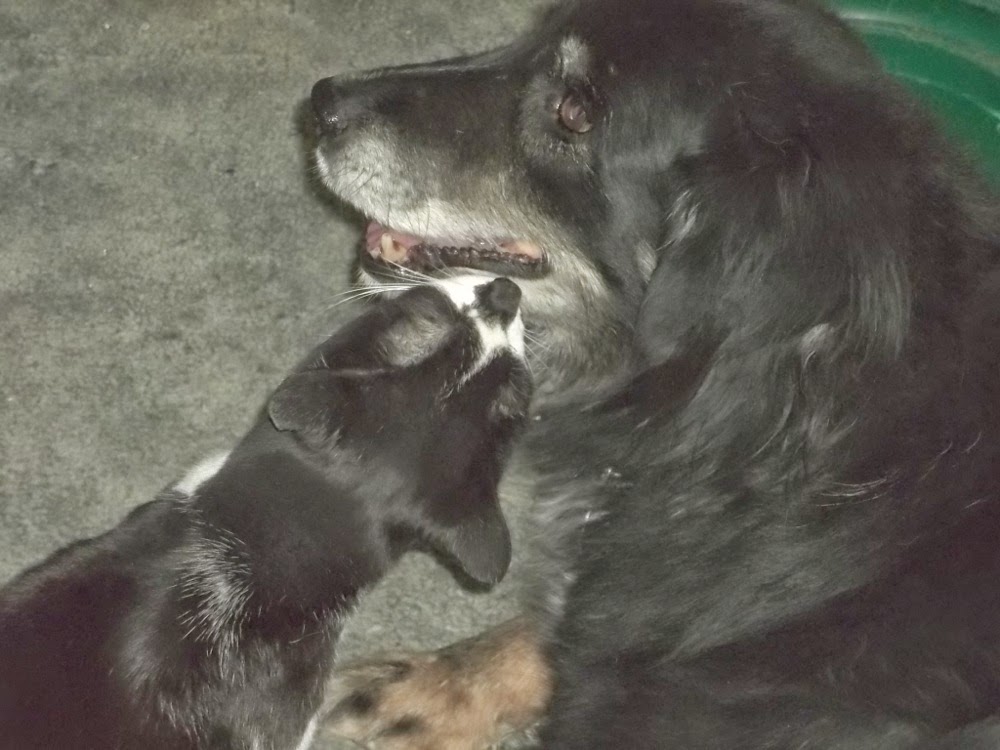 One would think Buck might appreciate this attention, but he never acknowledges her attention or presence.

TG herself is a victim of severe abuse, so perhaps she just understands Buck better than anyone else. She was caught in a steel jaw trap in 2005 and when I rescued her, she had to have a shredded front leg amputated to save her life.

It didn't take very long to recover from the injury, the surgery and the trauma, physically, but it took several years for her to let go of the emotional damage and allow us to show affection. We just didn't push it and allowed her to come around when she was ready for closeness.

Never push a cat to behave a certain way just to please yourself. They will respond when they are ready and you can help them become ready by proving you are not going to force them to do anything they don't want. Once she had watched us long enough to really know we were not a threat, she opened up and became a new cat! She is playful and happy, and now she has a job, too. She is Buck's end-of-life caregiver. I believe she knows he's not far from the end of his time on earth and feels compelled to comfort him, even though he hasn't shown any awareness of her devotion. This is true love, to care for someone without expectation of attention in return or in kind. I hope she doesn't get depressed when his time has run out. But we will be there for her, as she is for Buck now.

Thank you so much for sharing the stories of two of your special companions. Bless you for giving them a new life and much love.

Thank you for your kind words. I have not had time to update this story, so I will just let you know that Buck did pass over the Bridge on June 27. He is sadly missed by all of us and especially by TG, his constant companion for the last year.