Getting Creative With Crates

There has been a lot of criticism recently of people who allow cats to roam outdoors. Books such as Peter Marra's Cat Wars: The Devastating Consequences of a Cuddly Killer do make a point. Roaming cats are clearly responsible for the deaths of many birds and members of other valuable wildlife species.

This new emphasis on the harm done by outdoor cats flies in the face of a lot of trap/neuter/release programs that have been started around the U.S. as a way of putting feral cats to work controlling rodent populations. I myself was the guardian of a feral colony in Chicago. When my neighbor complained about the presence of roaming cats in her yard, I oriented several of the cats to greater domesticity. But it's very hard to re-condition alley cats to be satisfied staying indoors all the time. My cats still use a pet door to spend some time in my yard almost every day. Attempts at blocking off that pet door led to ferocious clawing, squalls, bad temper, and persistent, destructive efforts at escape.

However, I have felt a little less guilty about allowing my cats to continue some roaming behavior after I read an excerpt from Charles Darwin's On the Origin of Species. In an early chapter of that 1859 ground-breaking work, Darwin says:

The murder of humble-bees in any district depends in a great degree on the number of field-mice, which destroy their combs and nests... Now the number of mice is largely dependent, as every one knows, on the number of cats; and Mr. Newman says, “Near villages and small towns I have found the nests of humble-bees more numerous than elsewhere, which I attribute to the number of cats that destroy the mice.” Hence it is quite credible that the presence of a feline animal in large numbers in a district might determine, through the intervention first of mice and then of bees, the frequency of certain flowers in that district! (Darwin and others of that era referred to bumblebees as “humble-bees.”)

Researching this matter a little further, I found a lot of people in the Victorian era had made a similar association between the presence of sufficient numbers of roaming cats and the flourishing of their gardens. In the rather sexist terms of that era, people would lament the scarcity of “old maids.” That's because old maids were famous for keeping cats. No old maids, no cats. No roaming cats and the rodent population exploded. An exploding rodent population meant the destruction of bees' nests and therefore a failure of flowers and crops to be sufficiently cross-pollinated.

I don't seriously think that an insufficiency of feral cats is behind the collapse of bee populations around the world. However, in helping to control rodent populations, feral cats might at least play a small role in helping bees survive to do their vital work.

Incidentally, my cats DO control the rodent population. They kill not only mice, but large rats. People have doubted that cats will tackle hefty rats, but I can attest that my cats are lethal to even the biggest neighborhood rats.

However, after having had my conscience salved a little by reading Darwin's affirmation of the need for roaming cats, I was still left with the fact that my cats were killing as many as 3-4 birds a week that they caught around my bird-feeders. But I might have finally come up with an effective way of greatly reducing the risk to birds.

Nothing I commonly saw recommended worked. No bell collars, colorful clown collars, or typical fences, prevented my cats from catching birds unaware. But – Eureka! I have found an answer that seems to have cut down bird fatalities at my bird-feeders by about 90%. The answer is milk crates!

I collected a number of milk crates, the kind that have the open lattice-work bases. I kept in place the low wire fence I had put around the area under my bird-feeders. But inside that “compound,” I upended a dozen or more milk crates. The wire fence by itself did almost nothing to slow down my cats' attacks. But the cats absolutely cannot negotiate on top of or around the massed milk crates. However, the birds can easily perch on top of the plastic cross-pieces on these crate bottoms. And they can easily forage between the crates for dropped birdseed. These crates can be moved in seconds so that I can gain access to the bird-feeders to regularly re-fill and clean them.

Below is a picture of the crates I've positioned under my feeder. Given a little more time, I can collect or buy a more attractive array of crates, possibly even creating a tiered, multi-colored effect with them. Without getting too kitschy, I might also use the crates' plastic lattice-work as supports for real or artificial flowers. By decorating the crates with flowers, I would be making it even more difficult for the cats to negotiate their surfaces, and I'd be making a colorful display that would attract more birds and make the arrangement more visually appealing to neighbors. A person could exercise no end of creativity grouping milk crates into attractive landscape structures. 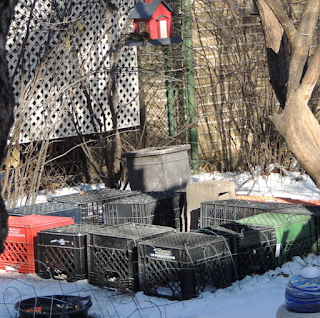 I'm surprised the cats cannot navigate around the tops of the milk crates, just as they do any flat surface. The holes make that much of a difference ? Regardless, thanks for your very clever solution !