Kitten season in the winter?

We moved out of town after the shelter closed so we could get away from people dumping unwanted animals in our yard. Well, some have found us, it seems. There aren't as many now, but we still get a few, and I can't be sure if it's on purpose or just random because some town people toss pets out of their cars in the country, thinking they'll find a fun life on a farm.

Typically, they need veterinary care as they haven't been altered, vaccinated or well cared for. So, along that vein, we've had two pregnant females left here in the last few months. (The others abandoned here happened to be fixed, at least.)

Sable and Leo are doing very well and are healthy. Leo is growing fast and is a delightful little boy. He will be neutered as soon as he's old enough, and his mother will be spayed.

The nameless one (help me out, if you like) gave birth in October to a wriggly, tiny one and left him on the cold concrete behind some boxes in the garage. I only found them because the little guy was crying so loudly. Good thing, or I never would have gotten to him. But I hope it isn't too late. He's not as healthy as our other kitten, possibly a premie? At the least, he's badly neglected by his own mother and I've had to step in and take over feedings. Even the vet is nervous about treating him because he's "frail" and too young for drugs or other treatments (such as, what?). That doesn't leave much but love to sustain him. And he's getting plenty of that.

Now 8 weeks old, he's still like a 4-week-old. And we're worried about his eyes. He was born with some infection, apparently, but we couldn't tell yet, because he didn't open his eyes at 10 days, as usual, but at 21 days, with help. Thanks to our vet, we are using a product I hadn't heard of before...Vetericyn. It's a non-drug natural product that fights infection. And it's working, but we won't know for a while if his eyes will normalize. 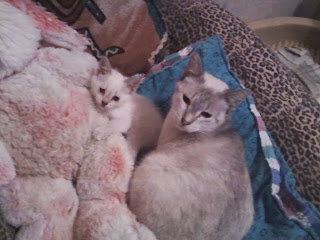 Here he is, with mama, who won't let him nurse. At least she lets him be close to her for warmth and comfort. She's probably too young to have kittens and just doesn't know what to do.Being half wild herself, I can't do much with her yet. But she's gradually learning to trust me. 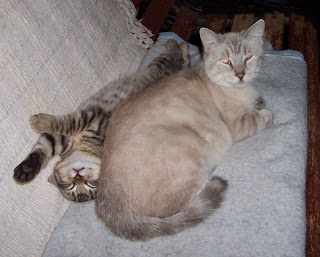 His mama, Sable, is very devoted and caring and looks after him diligently. She even plays with him as he gets into everything in the house! They have so much fun!
Posted by Dr. P at 7:20 PM