Happy birthday to Holly! She's 24 this month, though we don't really know what day she was born. In fact, we're not even sure of the month. March just happens to be the month we rescued her 9 years ago and were told she was 15 at the time. So, while her birthday is arbitrary, her age is very close to correct.

She certainly shows signs of advancing age - no teeth, thin, not interested in grooming herself as carefully as she used to, doesn't smell too sweet anymore, prefers petting to playing, and she sleeps a lot. Hmmm, most of my cats do that! 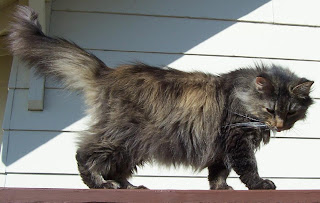 But Holly is an affectionate companion who is still very interested in her meals. Her favorite fare is raw meat, especially chicken, and she gnaws on a bone for hours afterward. It gives her something to do, that's for sure. But she is still pretty spry, too, and is quite capable of jumping up onto the counters, the top of the refrigerator, and the cat tree in the living room, where she can keep an eye on everyone from her high spot.

She never had any serious lookers at the shelter and never got adopted because of her age, so we figured she would just pass on when her time came and was welcome to hang out with us. She's never been any bother at the shelter or our home and sometimes we have to look for her if she doesn't show up for breakfast. But her hearing is still very good and she will come flying when called if she can catch a whiff of her chicken.

I know cats shouldn't drink milk, but it's one of her favorite foods, so we indulge her - not every day, but often. I mean, come on...she's 24. She can have whatever she wants!

Hugs and kisses for the wonderful Holly! Obviously she has such a wonderful home that she's not going anywhere! I hope she has many more happy birthdays! Thank you for giving her that chance and for sharing Holly's story.