Another successful rescue! Fluffy was found by a very kind rescuer in Missouri just before Christmas and appeared to be sick and injured. Sure enough, he had some sores and was in a pretty debilitated condition. The veterinarian there tested and treated him with antibiotics, and he was found to be positive for Feline Immunodeficiency Virus... or, FIV. Because he was debilitated, he could not be neutered or vaccinated. It was too risky and will have to be done later.

He's come a long way in just over a month, but he's not 100% yet. Speaking of coming a long way, he did, indeed, make quite a journey to get from that shelter to mine. There is more room here, so he can recover more easily in his own space. He will still need to be isolated for a while, and possibly always, but if another FIV kitty comes along, he could have a roommate. 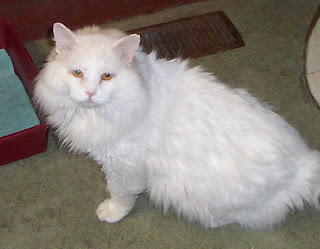 Welcome, Fluffy, to your new home! He just arrived 24 hours ago, so he's still settling in.

I've been calling him Fluffers, as Fluffy seems a little feminine for this big boy, but I'm open to name ideas if you'd like to send them in!

He's a very affectionate kitty and loves to be cuddled and petted. Tomorrow I will find out if he likes catnip!


We're holding a little contest to see if Fluffy needs a new name. Just use the poll on the right side of the page, check a name you think might fit him, and click Vote. On Feb. 28 we'll see which name brings in the most votes and that will be Fluffy's (new?) name. The winner will get my book, 7 Steps to 9 Lives. If you would like to add a name to the list, please put it into the Comments, below, before the contest ends. This poll will go for one week, with the name announced on Feb. 28. Thank you!

Update: Two more names just came in, too late to add to the list on the right, but I'm going to include them anyway, because I like them! How about "Muffy?"  Or, "Denali?" If you want to vote for either of those names, just put it into the comments below this post. There are two votes for Gus in there already, and one each for Muffy and Denali, so let me know how you wish to vote.

I vote for the name Asparagus - or Gus for short ... heheheh

I like Gus, and I've always liked the name spam for such a fuzzy little kitty!

My suggestion is DENALI. It is the name of a mountain range in Alaska and is Indian for "The Great One".

How about Augustus (still "Gus" for short)?

I vote for Augustus "Gus"

i tried several times to vote for Gus, but it wasn't taking it for some reason...