Welcome to our new kitty, Mystery! Yes, it's a mystery where he came from. About a week ago, as I was doing chores in the outbuildings on our farm, I noticed a new kitty in one of the cages. Since I don't use cages often anymore, it's lucky I noticed him at all, as he's a very quiet cat. He was just sitting in there, watching me clean the litter boxes and food dishes for the others. When I asked him where he came from, he just looked at me and sighed. He's not telling. 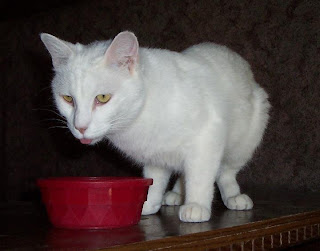 This used to happen fairly often when I had my shelter in town. Many mornings I would discover a new cat or dog in the yard, sometimes tied up, but usually just loose and frightened. Sometimes they were hard to capture, but just as often, they came right to me as if asking for help.

Now that Mystery has been here for a week, I have learned a little about him and think I can figure out what happened.

He's very sweet and affectionate, gets along with the other cats, and is very clean. So he's not a stray that just wandered in (and climbed into a cage). He was loved. His fur was indented where a collar used to be, and a gentle inspection by feel reveals he's been neutered, so he's probably been vaccinated, too. He appears to be quite young, probably 2 to 4 years old.

I left him in the cage for 5 days to observe him and to be sure he's healthy before allowing him into the larger room with the other cats in that building. There was some hissing, of course, but he seems to know how to get along with others. There have been no fights. He's a lover, not a fighter!

I believe he was surrendered by someone who had to move to a new home that doesn't allow pets, or perhaps he was eliminating where he shouldn't. Some cats do that in unfamiliar locations as a marking tool.

It would be more helpful if people who dump pets would leave a note, with age, health history, personality traits, and other information to help rescuers know how to handle things, and so a shelter can come up with the best housing and adoption options. But some people are embarrassed about giving up a pet, or just don't want to take a chance of paying a fee. Also, now we have to have him tested for common illnesses, too. At least this boy is in such good condition, we don't really expect him to fail any tests. But vet papers would be nice to have. We'll take care of that next week, when our vet returns from vacation.
Posted by Dr. P at 11:15 PM

Mystery is a beautiful kitty. I'm sorry he was left behind, or dumped... but I'm glad he found you!